Happy Birthday, Kentucky! On this date in 1792, Kentucky’s state constitution was accepted by Congress, granting us Bluegrass Statehood.

You probably already know, though maybe you don’t. . . there was no mistake when Danville named their Constitution Square. The three-acre park was the site of Kentucky’s ten constitutional conventions from 1784 to 1792.

Let’s get the most basic history out of the way: Kentucky began its journey to statehood in 1776 as Kentucky County, Virginia, with Brigadier General George Rogers Clark as head of the militia.   And the area grew rapidly. By 1784, dissatisfied with the Virginian government, Kentucky called its first constitutional convention in Danville. Six years, and 9 more constitutional conventions later, Virginia accepted Kentucky’s separation and Congress admitted the 15th state to the Union. (Learn more in Thomas D. Clark’s A History of Kentucky)

When you visit, be sure to take some time to visit Grayson’s Tavern, where the Danville Political Club met in the late 1780’s. In 1878, Thomas Speed II (of the Louisville Speed Museum Speeds) discovered a bundle of papers in his grandfather’s desk, labeled “Political Club Papers,” detailing minutes and descriptions of the club’s activities. During one such monthly meeting, the club members debated the US Constitution and drafted their very own document, “The Constitution of the United States as Amended and Approved by the Political Club.” The Political Club papers now reside at the Filson Historical Society in Louisville.

Today, Constitution Square not only commemorates the most important event in Kentucky history (the event that made us all Kentuckians!), but as the site of the Great American Brass Band Festival and the Kentucky State Barbecue Festival. You can snag a doughnut at Burke’s Bakery nearby and visit the square on weekdays between 9 am and 4 pm, or on Saturdays from 10 am – 4pm. Or, stop by while you take in the sounds of the Great American Brass Band Festival this weekend or the smells and tastes of the Kentucky State Barbecue Festival September 11-13. 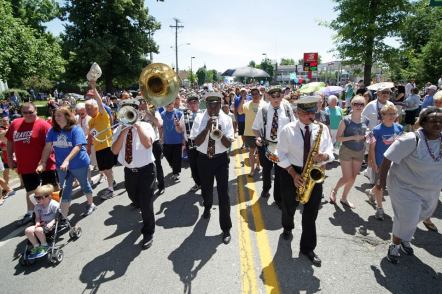