Kentucky was the 15th state to join the Union and the first on the western frontier. High Bridge located near Nicholasville is the highest railroad bridge over navigable water in the United States. Post-It Notes are manufactured exclusively in Cynthiana; the exact number made annually of these popular notes is a trade secret. The first American performance of a Beethoven symphony was in Lexington in 1817. Pikeville annually leads the nation in per capita consumption of Pepsi-Cola. Teacher Mary S. Wilson held the first observance of Mother’s Day in Henderson in 1887; it was made a national holiday in 1916. The song “Happy Birthday to You” was the creation of two Louisville sisters in 1893. More than $6 billion worth of gold is held in the underground vaults of Fort Knox; this is the largest amount of gold stored anywhere in the world. Cheeseburgers were first served in 1934 at Kaolin’s restaurant in Louisville. Middlesboro is the only city in the United States built within a meteor crater.

The spirit of that phrase has inspired the Kentucky Department of Travel to host a campaign and Twitter contest this fall. “There’s Only One Kentucky” highlights 26 uniquely-Kentucky destinations filled with history, fun and beauty.

The contest asks you to tweet for 26 days about only-in-Kentucky attractions with the hashtag #OnlyOneKentucky. Each day you tweet, you’re entered to win that day’s prize. You can learn more about the contest rules and details here: http://www.onlyonekentucky.com/

In the spirit of the contest, we’ve put together a short list of some of the “Only One” destinations we’ve visited. We’ve had a great time on our travels so far — we’d love to have you join us in enjoying the Bluegrass State!

1. Lexington is known as the Horse Capital of the World

OK, we’re a little biased here. We’re both born and raised Lexintonians, and we’ll be the first to tell you there’s no where else in the world like it. The rolling hills of Bluegrass and sweeping fields of thoroughbred horse farms are just the start of its beauty. While you’re there, take a walk through Gratz Park or visit downtown and Cheapside Park. There are tons of great things to do in Lexington. 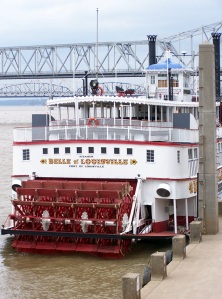 2. Take to the  Ohio River on the Belle

The Belle of Louisville is a historic steamer docked on the riverfront in downtown Louisville. Take day cruises, dinner cruises or special event cruises. A few years ago, our friends joined us for a special fireworks cruise on the Belle on the Fourth of July. It was a beautiful night of dancing and fireworks.

3. Take a tour of Bourbon Country

Earlier this year, we road tripped to the Maker’s Mark Distillery in Loretto, Kentucky. It was a fun an informative day full of good friends and great bourbon. But the Maker’s Mark distillery is just one stop on Kentucky’s Bourbon Trail. 95 percent of all bourbon is distilled, aged and bottled right here in Kentucky. That makes it a must-see.

4. Hang out with the buffalo in Land Between the Lakes

Blair will always hold a soft spot for Land Between the Lakes and the bodies of water that surround it (Kentucky Lake and Lake Barkley). Her grandparents live in one of the neighboring counties, and she spent countless summers growing up there with her brothers and sister. In fact, we just made a trip back to western Kentucky a few weeks ago and it is just as beautiful as she remembers it. Enjoy the great food, all of the miniature golf, the lovely resorts along the lake — Lake Barkley State Resort Park, Kentucky Lake State Park, Prizer Point, just to name a few — and if you look close enough, you’ll even spot a few buffalo. How very uniquely Kentucky.

5. Whether to rock climb or to eat some delicious pizza, people come from around the world to see Red River Gorge

This canyon system on the Red River in east-central Kentucky is about 44 square miles of high sandstone cliffs, natural bridges, waterfalls and rock shelters. ‘The Red’ attracts rock climbers and bolder-ers from around the world to experience the tons of bolted routes in overhanging, pocketed sandstone. When you’re there, be sure to check out Natural Bridge State Park. This natural sandstone bridge spans 78 feet and is 65 feet high. And don’t you dare leave without stopping at Miguel’s Pizza in Slade, Kentucky. Some of the best pies I’ve ever tasted.

This is just a few items off of the “There’s Only One Kentucky” list. To see them all, go here.

One thought on “There’s Only One: Check out these uniquely-Kentucky destinations”