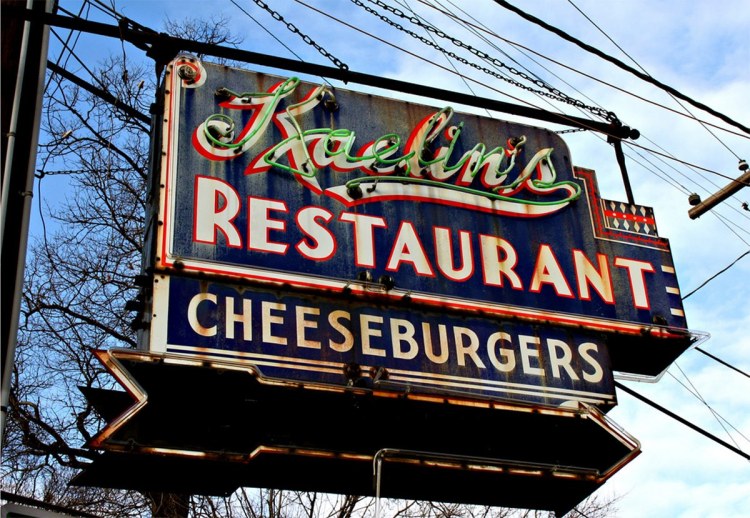 As a nation, we faithfully celebrate National Cheeseburger Day each September with a version (or five) of the American tradition enjoyed for each of your three meals of the day. But did you know that Kentucky was home to the very first cheeseburger? Yep! Kaelin’s Restaurant in Louisville invented the cheeseburger. Well at least according to some—but they’re the very most important some.

A cheeseburger is a hamburger with cheese added to it. Seems simple enough, right? Well it isn’t if you’re the one trying to stake claim on crafting the very first cheeseburger ever made. Ever.

Adding cheese to your beef-and-bun combo became popular in the 1930s, and here in Kentucky, every good citizen and burger enthusiast knows that the cheeseburger was invented at Kaelin’s Restaurant in Louisville. In 1934, Carl Kaelin threw caution to the wind and placed a piece of American cheese on a hamburger patty in his new restaurant. A culinary treasure was born, and Louisville still claims to be the birthplace of the cheeseburger, and rightfully so.

Carl Kaelin and his wife Margaret opened their restaurant on Newburg Road in 1934 and shortly after tossed a slice of cheese (the American variety despite Carl’s Swiss ancestry) on a beef patty creating a truly-American culinary staple. While others have certainly claimed the cheeseburger—we’re looking at you, Humpty Dumpty Drive-In in Denver, Colorado (who ultimately trademarked the name “cheeseburger” in 1935 but who cares about that?)—Kentuckians trust Irma Kaelin Raque, Carl and Margaret’s daughter, who began helping her mother take hamburger (and cheeseburger) orders as a three-year-old. The way Irma tells it, her mother was cooking burgers one day when her father casually suggested putting cheese on them. He promptly finished three of them in one sitting.

While the original restaurant closed in 2009, Kaelin’s has re-opened in its original location with a lot of old classics and new menu items too! Next time you’re in Louisville, you have to stop by!

Enjoy a patty with cheese for us today! We just tried this delicacy at the Kentucky State Fair: a bacon cheeseburger sandwiched in the middle of two Krispy Kreme donuts—we know you’re jealous.

Interested in learning more about Kentucky’s famous culinary inventions? Get your copy of My Old Kentucky Road Trip’s Famous Kentucky Flavors in your local bookstore or on Amazon!